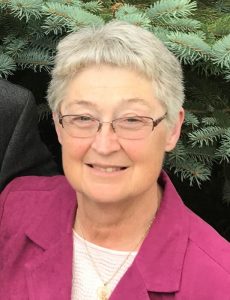 Linda Fixsel (Parrott) was born May 2, 1945 to Robert Dean and Mabel Marie (Gordon) Parrott in Auerlia, Iowa. She was raised on a farm, the oldest of three girls.

Growing up Linda was active in 4-H.  She was a graduate of Aurelia High School in 1963. After high school, she attended Secretarial school at NBT of Sioux City and then worked for Postal Finance in Sioux City for many years.

Linda was united in marriage to Larry Fixsel on July 8, 1967.  They farmed in rural Anthon, where they raised their two children, Marc and Susan.

In earlier years, Linda helped a great deal with the farming, pig raising and with harvest by unloading corn for Larry. She also helped Larry mow the Rock Branch cemetery for many years. Later in life she was a cook at the Anthon-Oto School for nearly 15 years.

Linda’s greatest joy in life was spending time with her grandchildren. They brightened her day and the smile they put on her face was priceless. Linda enjoyed cooking, gardening and making 4-H pies with her children and grandchildren.

She and Larry enjoyed dancing and socializing with their Rock Branch neighbors.

Linda spent many hours planting her garden and flowers each spring and enjoyed helping with the Woodbury County Fair each summer.

She was preceded in death by her parents, Robert and Mabel Parrott; her in-laws, Ray and Margaret Fixsel; an infant grandson, Devan and infant granddaughter, Brittney.

A special thank you to the Happy Siesta Nursing Home staff in Remsen for taking such good care of Linda during her stay.

In lieu of flowers, condolences and special memories may be sent to the Fixsel Family, Box 296, Moville Iowa 51039.