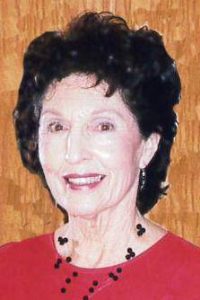 Visitation was from 9:00 to 9:30 a.m. Friday, October 23, with a prayer service at 9:30 a.m., at Morningside Chapel, Christy-Smith Funeral Homes. Burial will be in Memorial Park Cemetery. Online condolences are at www.christysmith.com.

Virginia was born on Oct. 16, 1929 in Sioux City to Gladys and Dwight Searls. She attended Central High School and graduated in 1948. During high school, she was a majorette. She always said she twirled two batons and never dropped them.

Virginia was a member of the Moville United Methodist Church.

Left to cherish her memory are her sons, Jeff Thompson and his good friend Carol (Martinson) Aspleaf, and Greg Thompson; her sister, Barbra Dyer; her brother, Rod Searls and his wife, Shirley; her grandchildren Zach Thompson and Lindsey, Ian Thompson and Rachel, Cierra and Trever Bunch; and her great-grandchildren Brynn Thompson, Finnian Bunch, and Arronis Bunch.