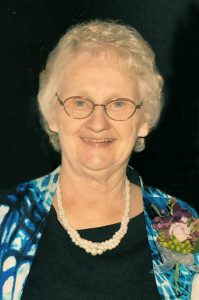 Armstrong – Van Houten Funeral Home of Anthon, Iowa, is in charge of the funeral arrangements. Condolences may be sent online to www.armstrongfuneral.com.

She grew up there with her four brothers and two sisters and attended school at Oto, graduating in 1961 from Anthon-Oto High School.

On April 22, 1961, Carolyn was united in marriage to Francis B. Meyer at St. Mary’s Catholic Church in Oto. They lived in Oto until 1971 and then moved to the Meyer farm southeast of Anthon where they raised their five children.

After Francis passed away in 2000, Carolyn moved to Anthon where she lived until April 2015. Since then she resided at Happy Siesta in Remsen, Iowa.

Carolyn worked at the Anthon General Store for her best friend, Gayla Wilson. She worked there for 25 years and retired in December 2005 from the Anthon Shell station.

She was a lifelong member of St. Mary’s Catholic Church in Oto where she taught CCD numerous years, was a member of the Altar Society, and Catholic Daughters of America Holy Rosary Court #1602.

Carolyn also started the group “Mary’s Angels” and first participated in the Relay for Life event on May 17, 1997, which was her sister Mary Ellen’s birthday, and in memory of her. As head captain for 13 years, she led the group to raise money to fight cancer.

Carolyn was known for being a caregiver. With a lot of patience and love, she took wonderful care of her husband, children, and numerous family members over the years. She was always smiling and laughing, and she loved to sing and dance.

A special thank-you to the Happy Siesta Nursing Home Staff in Remsen for taking such good care of Carolyn for the last 5½ years. In lieu of flowers or plants, donations can be made in Carolyn’s name to the DREAM Program at Happy Siesta, P.O. Box 80, Remsen, IA 51050.