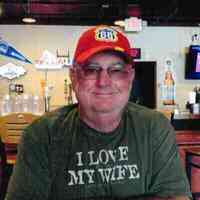 Marvin Earl Flewelling, 71, of Moville, passed away Saturday, Oct. 24, 2020 at his home surrounded by his family.

Celebration of Life was held at 5:30 p.m. Monday, November 2 at the Moville United Methodist Church. with food and fellowship immediately following at the Crankshaft Bar and Grill on Moville’s Main Street.

Burial will be in Arlington Township Cemetery at a later date. Waterbury Funeral Service of Sioux City is assisting the family with arrangements.

Marvin was born June 27, 1949 in Sioux City, Iowa the son of Thomas and Lily (Johnston) Flewelling. He grew up in the Moville area, graduating from Woodbury Central High School in 1968.

Marvin was drafted into the Army in early 1970 and was honorably discharged in late 1971. He married the love of his life, Donna Cross, on July 30, 1977. Together they made their home in the Moville area.
Over the years, Marv worked with heavy equipment in the family business, Flewelling Sand and Gravel and Flewelling Earth Moving. During winter months, he enjoyed working for the Woodbury County secondary roads department operating a maintainer clearing snow.

He was a member of Moville United Methodist Church and the American Legion Post #140 in Kingsley.

Marv enjoyed fishing and camping, and he was a car enthusiast. He loved driving anywhere for a road trip and hunting the road ditches for asparagus. He waved and honked at everyone during his everyday travels.

He was preceded in death by his parents and his son-in-law, Corey Campbell.