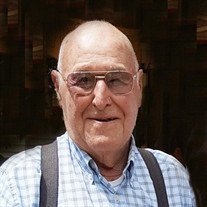 Marvin was born on May 26, 1931 in Anthon, Iowa. The son of Lawrence and Clara (Bahmer) Manker. He served in the U.S. Army and was stationed in Japan during The Korean War.

On Nov. 25, 1960 he was united in marriage to Jeanette Leffler. To this union four daughters were born, Deb (Ron) Speckmann, Sheryl (Clint) Herbert, Sandy (Gary) Reuter, and Cynthia (Don) Wiederin. They made their home in Sioux City, Iowa, where he lived in the same house until his death.

Marvin worked as a Superintendent with Boswell and Irving F. Jensen Contractors.

In Marvin’s spare time he enjoyed going for motorcycle rides, especially with his sons-in-law and his brother-in-law, Rich Wilen. He also enjoyed fishing with his grandkids. He liked tinkering with things and spending time with his furbabies, Abigail and Molly.

He is survived by his daughters Deb, Sheryl, Sandy, and Cynthia; 13 grandchildren; 14 great-grandchildren; two sisters, Audrey and Elaine; brother, Roger; and many nieces and nephews.

Marvin was proceeded in death by his wife, Jeanette; his parents; brother, Lyle; and his grandsons, Nathaniel Speckmann and Brad Reuter.