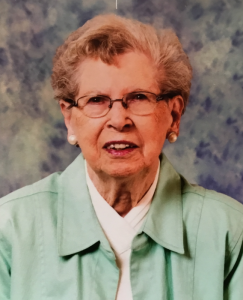 Helen M. Leinbaugh was born April 3, 1929 at Soldier, Iowa, the daughter of Guy and Gunda (Swenson) Harris.  She was baptized and confirmed in the Soldier Lutheran Church.

She graduated from Soldier High School in 1946, then from Commercial Extension Business School in Omaha in 1947.  She moved to Sioux City and worked one year in an office at Wincharger.

She was married to Harry W. Leinbaugh Jr. in July 1948 in Sioux City.  To this union one son was born, Richard Harry.  In 1952 they moved to Norwalk, California, then later to Omaha, Nebraska where she worked in the office at Cudahy Packing Co.

Helen was a dedicated volunteer at the Senior Center where she served as Secretary of the Board beginning in March of 2004. She was in charge of Bingo, Wii Bowling, and other activities. Family was very important to Helen.

Survivors include son, Richard and wife Pamela of Clive, IA; two grandchildren, Aaron and wife Rachelle of Breckenridge, CO and Kaysie and husband Chad Ludewig of Norwalk OH; two great-grandchildren, McKenna Ludewig of Norwalk, OH and Paxton Leinbaugh of Breckenridge, CO.  She is also survived by her brother, Calvin Harris of Logan, IA; nephew, Loren Andrews of Moville, IA; and niece Jackie and her husband Denny Frerichs of Urbandale, IA; and many extended relatives.

Preceding her in death were her parents; husband, Harry on March 21, 1998; two sisters, Edith Harris and Shirley Golden; a brother, Glenn Harris; an infant brother; and her brother-in-law, Bill Golden.