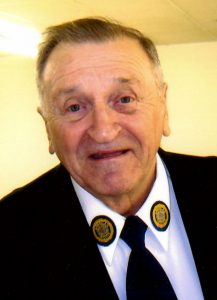 William “Bill” L. Wilson, passed away peacefully with his family at his side Wednesday, Nov. 5, 2020 at Kingsley Specialty Care in Kingsley.

A visitation was held Sunday, Nov. 8, 2020 from noon until 2:00 p.m. at Rohde Funeral Home in Kingsley, Iowa.  Burial will be at Kingsley Cemetery with military rites being conducted by the U.S. Army and American Legion Nash Post 140 of Kingsley, Iowa. Condolences may be directed to the family through www.rohdefh.com.

William Leland Wilson was born January 2, 1934, Kingsley, Iowa, the son of Dallas & Vonda (Ledgerwood) Wilson.  He married Maureen Turkington on May 13, 1961 in Sioux City.  Four children were born to this union.

On June 7, 2001 he married Marilyn Olsen in Kingsley, Iowa.  Bill graduated from Central High School in Sioux City, Iowa in 1954.  He worked for IPS as a specialized gas serviceman going to work for the IBEW Local 189, working as a business agent until he retired in 1996.

Bill served in the U.S. Army from 1954 until 1956 serving in Korea until he was honorably discharge as a private first class.  He was a member of the North Riverside Masonic Lodge #662, serving as Worshipful Master.

He was a volunteer for the Democratic Party of Iowa which included a proud moment driving Bill Clinton as a presidential candidate. He volunteered for United Way, also was a Board member of Food Bank of Siouxland.

Bill was a SBDC member, NW Labor Council Hall of Fame and a member of Habitat for Humanity.

Bill was a family man who was very civic minded always being involved with the community he was living in, his nickname was “Whistling Willy Wilson” because was always whistling.  He adored all his grandchildren and step-grandchildren and loved watching “war movies” and the Green Bay Packers.

Bill was preceded in death by his parents, four brothers, one stepson and a step-daughter-in-law.

Memorials may be directed to Food Bank of Siouxland or Habitat for Humanity.