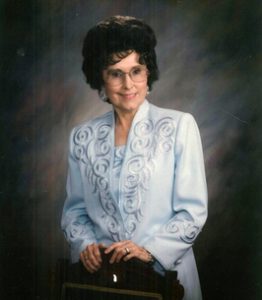 Due to COVID–19 concerns, a private family graveside service will take place at St. Michael’s Catholic Cemetery in Kingsley at a later date.  The Johnson – Earnest Funeral Home in Kingsley is assisting Gerry’s family with funeral arrangements.  Expressions of sympathy may be directed through www.mauerjohnsonfh.com

Geraldine Mary Weinreich was born on October 15, 1928 to Elmer and Florence (McDermott) Dugan in the home of her paternal grandparents, Bernard and Margaret McDermott, in Kingsley, Iowa.  She attended elementary and high school in Kingsley.

While carrying extra subjects in high school she also held two jobs at the variety store and as a ticket taker at the Deluxe Theater.

Gerry was a member of the National Honor Society, royalty, cheerleader and worked in the Superintendent’s office for a class period.  She was also a member of chorus and girl’s glee club, sextet, trio, mixed chorus and band.

Gerry graduated from high school as Salutatorian in 1946 and then attended Briar Cliff College in Sioux City, Iowa on a full scholarship.  She was inducted into the National Sociology Academic Society.

Gerry was engaged to Rex L. Weinreich of Pierson, Iowa at the Grandview Rose Garden in Sioux City in May of 1948.  They were united in marriage on November 3, 1948 at St. Michael’s Catholic Church in Kingsley.

After a honeymoon in Niagara Falls they lived in Kingsley for a year before moving to a farm near Grand Meadow.  After farming there for three years, they moved to the farm of her maternal grandparents in 1953. They have lived there since.

She was appointed District Deputy for many years and visited five courts.

Gerry was a lector, was one of the first Eucharistic Ministers, and served as chairperson at St. Michael’s Centennial Celebration.  She also taught CCD for 25 years.

Her hobbies included sewing which she enjoyed very much.  She was an accomplished seamstress and enjoyed many sewing projects like her children’s clothes, bridal party dresses and costumed dolls for her granddaughters and many others.

Gerry loved to crochet, making quilts for all of her children.  She also liked to play cards and square dance.

Gerry and Rex were charter members of the Kingsley Swingers Square Dance Club in Kingsley and danced in various towns and in Mesa, Arizona.  They have spent winters in Arizona since 1983.

She was preceded in death by her parents; her husband Rex on June 10, 2016; a brother, James Dugan and his wife, Madonna; and her nephews Michael, Steve, Johnny and Larry Dugan and Robert Berglund.