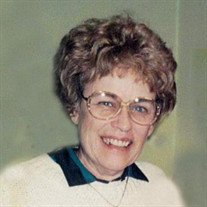 A memorial service for Jeanette will be held at a later date. Christy-Smith Funeral Homes, Morningside is assisting family with arrangements.

She grew up in Sioux City and graduated from East High School. She then attended the University of Nebraska, where she met Verlin Ailes. They married and had two children, Otto Nicholi and JoLynne.

Jeanette raised her children in Sioux City while working for Pecaut and Company, where she retired.

She married Robert F. Beckel and the couple made their home in Omaha, Nebraska. Upon his passing she returned to Sioux City.

She is survived by her daughter, JoLynne Counter; her grandchildren: Josh (Carrie) Counter, Ali Williams,  and Jewell Ailes; and her great-grandchildren, Ava Williams and Colton Counter.

She was preceded in death by her parents; both husbands; her son; and her grandson, Joseph Norman Ailes.