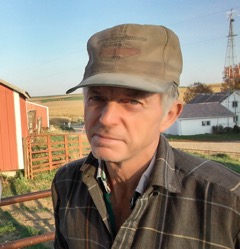 A funeral service was held on Monday, November 16, 2020 at 1:00 PM at the St. John’s Lutheran Church of Cushing with the Pastor Tami Groth officiating.  Burial was at the Cushing Cemetery of Cushing with military rites conducted by the American Legion F. Roger Baumann Post #624 of Cushing.

Marc was born March 15th, 1952 at Battle Creek, Iowa to Virgil and Emma Jean Else.  He was raised on their farm outside of Cushing.  He began school in Cushing, later graduating from Eastwood in 1970.  He spent six years in the Army National Guard, from which he returned to the farm and began his farming career working with his father and brother.

In 1976, he met Lana Jean Campbell, and in March of 1977 they were wed.  They moved into a farm outside Cushing, where they resided their entire married life.  They were blessed with two children in 1981 and 1982.

They say farming is a way of life, and Marc was an embodiment of that sentiment.  While he enjoyed his family vacations, his place was on the farm.  He was always the machine operator, running the combine, corn picker, and baler.  As such, his hobbies were mostly farm related.  He enjoyed going to Threshing Bees, making the trip to Albert City annually for their tractor show and threshing event.

He also enjoyed fiddling with old tractors, and restored a few tractors throughout the years.  He showed some of those off in the local “out of field” class tractor pulls on the 4th of July in Correctionville.  In his earlier years, he played some fast pitch softball for the Cushing team.  He enjoyed bowling league and playing in card clubs with his wife.  Later he was ever-present at each of his children’s, and then grandchildren’s, sporting and school events.

Marc battled Alzheimers for the last several years, but he overcame the challenges it presented and maintained his way of life on the farm.  He was a quiet man who mostly kept to himself, but he would do anything for anyone.

Left to treasure his memory are his wife, Lana; his son, Marshall Lundt of Cushing; his daughter, Kayla Lundt of Sioux City; his brother, Bruce (Renee) Lundt of Correctionville; his brother-in-law, Wayne Hamman of Mapleton; his brother-in-law, Roger (Molly) Campbell of Bakersfield, California; his grandchildren, Casen and Avery Lundt and Dannielle Book-Lundt and her special friend Roger Askvig of Correctionville; and his great-grandchildren, Oaklynn and Lillian Askvig; and several nieces and nephews, cousins, and friends.

He was preceded in death by his parents, Virgil and Emma Jean Lundt; his father and mother-in-law, Dale and Madaleine Campbell; his brothers-in-law, Vernon and Michael Campbell; his sister-in-law, Linda (Campbell) Hamman; and his niece, Jenn (Campbell) Reta.