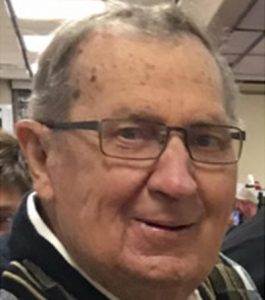 Raymond E. Ellerbusch, 93, of Holstein, was called to his Heavenly home to join his parents, brothers, and sister on Nov. 19, 2020. We thank God for gently taking him after a brief battle with pneumonia. He was surrounded with love by his wife and daughters.

A private family funeral service will be held at St. Paul Evangelical Lutheran Church of Holstein, with Pastor Bob Lewis officiating. Military rites will be conducted by the American Legion Dessel-Schmidt Post No. 225 of Holstein.
Nicklas D. Jensen Funeral Home of Holstein is in charge of the arrangements. Online condolences can be made at nicklasdjensenfh.com.

Raymond was born on Oct. 16, 1927, in Royal, Nebraska, to John Paul and Adele Stoltenberg Ellerbusch. He started country school in the first grade at age 4 and was the only student in his class. Because he was so young, he spent much of the day on his teacher’s lap while she taught the older students. Then the older students taught Ray.

After the drought in 1936, Ray’s family moved to Holstein. His father farmed and raised turkeys for his uncle on the farm that is west of the Casey’s store today.

Ray graduated from Holstein High School in 1945 and shortly thereafter, enlisted in the Army because they offered a program that for every month for which he would serve, they would pay for two months of college. He was stationed in Sasebo and Fukuoka, Japan.

At the time of his discharge, the Army offered a higher rank to all of his company who would reenlist. Ray chose to come back home and farm with his father, only later to find that most of his comrades who had reenlisted were killed in an attack.

Ray was very proud to have served his country. He enjoyed these lifelong friendships and the army reunions throughout the years.

He attained the rank of Sergeant and was honored to be awarded the Army of Occupation Medal-Japan, Marksmanship Badge-MI Rifle, World War II Victory Medal, and the Good Conduct Medal. He was honored to be invited into the Dessel-Schmidt Post of the American Legion.

Raymond always valued higher education and upon his honorable discharge in 1947, had hoped to attend college, but he took an opportunity to farm instead.

He met his loving bride, Gloria Sindt of Cushing, Iowa, through mutual friends in 1948. After they married on March 11, 1951, they moved to the farm Ray had purchased in 1950. They spent the next 55 years of their lives on this farm, located one mile north of Cushing, raising their daughters, growing crops and a cattle herd, and feeding cattle and hogs.

Raymond always had a heart for service and spent 35 years on the Douglas Township Board of Trustees. He also served on the board for the Coop, REC, Kiwanis, and held many positions on his church council. He stayed abreast of the best conservation practices and was one of the first to implement contour farming in the county. He was awarded The Quad State Conservation Achievement Award in 1994.

Raymond and Gloria enjoyed life to the fullest. They took many fishing trips with friends to Canada and have enjoyed their card club friends since 1951. They had many travels with their antique cars with the Serpaci Club of Storm Lake and seldom ever missed a dance in the area. Golfing provided many years of fun along with new friendships.

Ray and Gloria loved to travel and have been to most states, to many European countries, and a cruise to the Panama Canal. They blessed their family by taking them along on trips to the Dominican Republic and various closer destinations.

In January 2019, Ray decided he “had another trip left in him” and took his family of 33 to Disneyland where he enjoyed seeing the magic of this place through the eyes of his great-grandchildren. He joined them on many rides, including the 52 foot drop of Splash Mountain twice. Mickey Mouse made the trip very special since he and Ray were “born” in the same year. More than anything, Ray loved to be with his children, grandchildren & great-grandchildren, who always made him feel young again.

Those who are thankful and so very blessed to have shared in his life are Gloria, his wife of 69 1/2 years; his three daughters, Debra (Thad) Bagenstos of Holstein, Cheryl (Luane) Todd of Correctionville, and Janet (Lewis) Byers of Pierson. Ray had eight grandchildren who will cherish his memory. They are Erica Todd Davis (Troy), LeAnn Todd Hoien (TJ), Shawn Todd, Wade Bagenstos (Libby), Brooke Bagenstos Boddicker (Brian), Dr. Abbie Bagenstos Otto (Kelly), Jacob Byers (Haley), and Ethan Byers. Ray was a very loving Papa to 13 great-grandchildren who are Kinsley, Briggs, and Benson Boddicker, Madi, Megan, and Grant Davis, Tregg and Hadley Bagenstos, Gavin, Grady, and Garet Byers, and Elin and Zuri Otto. He is also survived by a sister-in-law, Carolyn Sindt.

Ray will be remembered for his deep faith and his kind and gentle ways. He was truly the compass for our family.

Raymond was preceded in death by his parents; brothers and sisters-in-law, Fred and Ruby Ellerbusch and Lester and ViLois Ellerbusch; sister and brother-in-law, Pauline and Leigh Drake; brother-in-law, Creighton Sindt; and  a nephew, Pastor Steve Ellerbusch.

In lieu of flowers, the family is requesting that donations be made to St. Paul Evangelical Lutheran Church of Holstein.