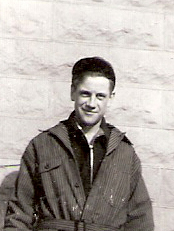 A private family service will be held at a later date.  Burial will be in Arlington Township Cemetery in Moville, Iowa.   The Johnson – Earnest Funeral Home in Kingsley is assisting the family with funeral arrangements.  Expressions of sympathy may be directed through www.mauerjohnsonfh.com

Charles Eldon Stephenson was born on February 16, 1931 in Kingsley, Iowa, the son of Charles H. and Cleda Jane (Bowman) Stephenson.  He attended school in Kingsley.

When Eldon was 13, he moved in with his aunt and uncle, Lee and Dorothy Simons.  At age 18, he began working with them on the farm, and after their passing, farmed on his own.  In 1998, Eldon moved into Kingsley.

He enjoyed his friends and relatives stopping by, the cards they sent and phone calls he received.  Eldon also liked listening to country music and watching old westerns.

Eldon is survived by a niece, Nancy (Ron) Mathers of Kingsley, IA; their son, Jeff Mathers and his special friend, Liz Elliott of Firth, NE; and Jeff’s daughters Alex (Johnny) Saunders, Morgan Mathers and Dylan Mathers; a nephew, Larry (Karen) Wink; their daughter, Jaclynn (Kevin) Claussen and children, Brylie and Bo, and their son-in-law, Lincoln Umbach and son, Keagan all of Anthon, IA; along with several other nieces and nephews.

He was preceded in death by his parents; his sisters, Dorothy (Lee W.) Simons and Bonnie (Luvern) Wink; his brothers, Curtis (Mary) and Jesse (Gladys); and great nieces, Kristi Mathers and Billie Umbach.