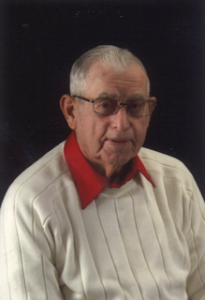 In lieu of flowers, the family is requesting that memorials be made to the Cushing Fire Department.  The Nicklas D. Jensen Funeral Home of Correctionville is in charge of the arrangements.

Eldon Ellsworth Nippert was born January 16, 1924 in Galva, Iowa to Roy and Lenora (Joslin) Nippert.  He attended school in Galva and Cushing, graduating from Cushing High School in 1943.

On March 30, 1944 he joined the U.S. Army during World War II.  He was wounded while serving in France and later sent to Italy until August 1945, then to Ogden, Utah.  He was honorably discharged in March of 1946.  He received the Purple Heart, Marksmanship and Bronze Star.

Eldon started farming in 1947 and later started a trucking and corn shelling business, which he ran from 1966 until 1984.

Eldon was united in marriage to Vicki Meines on September 28, 1983.  They started farming in 1984 on the Meins Family Farm and continued farming until he retired in 2004.  Since you can’t take the farm out of the man, he continued helping Jason with spring farm work and harvesting.  He completed the harvest season of 2019 at the age of 95.

Eldon belonged to St. John’s Lutheran Church.  He was a member of the F. Roger Baumann Post #624 for 76 years, in which he served as Commander for more than 25 years.  He was a former member of the Cushing Fire Department and Town Council.  Eldon enjoyed farming, creating things in his shed, building birdhouses, painting everything white and listening to Polka music.

On June 2, 2009 he was honored to be able to go to Washington D.C. on the Siouxland Honor Flight for World War II veterans.  There he saw the World War II Memorial, Korean Monument, Vietnam Wall, Changing of the Guards at Arlington National Cemetery and much more.

He was preceded in death by his parents; father and mother-in-law, Henry and Ella Meins; sister, Wilma Schafer; brothers-in-law, Don Schafer and Dick Hulce; and a special cousin, Merle Kurtz.