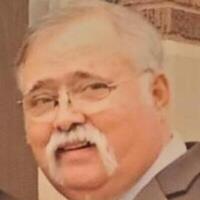 Services were held at 11 a.m. Friday, December 4, 2020 at Waterbury Funeral Service of Sioux City.  Burial was in Arlington Cemetery in Moville, with Military Honors provided by the United States Navy following the service.

Richard Leroy Duerksen was born on February 12, 1954 in Sioux City, he is the son of Harry and Margaret (Jors) Duerksen. He was raised by Abe and Deloris Duerksen in South Dakota.

Richard graduated from Bridgewater High School in Bridgewater, South Dakota. He worked at Stanley Corner which his parents owned outside of Bridgewater for years.

He then enlisted in the Navy where he served many roles ranging from being a fireman to working on an aircraft carrier. Upon his honorable discharge, he worked in Galveston, Texas primarily as a tow truck driver. He later moved back to Iowa and was a chef at Theo’s Steakhouse.

He was always proud to be a part of the local Volunteer Fire Department. He served on Lawton and Moville’s fire departments while living in those communities. Richard worked many years at Service Construction in Sioux City, where he enjoyed working outside and staying busy.

Richard finished his career working as a Correctional Officer with the Woodbury County Sheriff’s Office for 23 years where he worked until he retired. He took great pride in his accomplishments in competitive range pistol shooting and being a Reserve Deputy when needed.

Richard enjoyed playing poker with his family, fishing and going to movies. He loved racing, especially being a pit crew member for John Heins.

He enjoyed attending all events at the Tyson Event Center, whether it be a Musketeers game or monster trucks with his kids, attending Kansas City Royals baseball games. Richard would help anyone in need, and he considered everyone he met a friend.

He was preceded in death by his parents, grandparents, and his sister Sherry Webb.