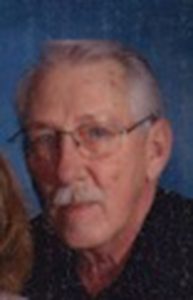 A private family funeral service will be held at the Nicklas D. Jensen Funeral Home of Moville with Pastor Barb Spaulding officiating the service.  Burial will be held at a later date. Military rites will be conducted by the American Legion Wink-Sparks Post #303 of Moville.

In lieu of flowers, memorials can be made to Jerry’s family. There was a live-stream of the funeral service on Tuesday, December 15, 2020 at 10:30 a.m. The Nicklas D. Jensen Funeral Home of Moville is in charge of the arrangements.  Online condolences can be made at nicklasdjensenfh.com.

Jerry Allen Fisher was born on August 30, 1945 in Cedar Falls, Iowa to Alvin and Elsie (Christiansen) Fisher.  He grew up on farms in the Hudson and Dike areas and graduated from the Dike Community School in 1963.

After graduation Jerry worked on his parent’s dairy farm while attending the Hawkeye Institute of Technology.   He entered the Army in 1965 and served in The 1st Infantry Division and Army Security Agency in the Vietnam War.  He was honorably discharged in 1969.

Jerry married Lavelle Henze on July 20, 1972.  To this union, three children were born.  After their marriage they moved to Jerry’s family farm.  They farmed several farms in the central Iowa area, in addition to Jerry working as an insurance adjuster for Farm Mutual Insurance in Denver, Iowa.  They moved to rural Gratiot, Wisconsin in 1980 to operate a grade A dairy farm.

The family moved to the Moville area in 1986.  Jerry got a job as an insurance adjuster/investigator for Luse Etler Goodwin Insurance in Moville.   Jerry faced many serious health issues that forced him to retire early.

Jerry loved spending time with his family and friends.  He was a member of Trinity Lutheran Church and was on several boards and committees in his healthier years.  Jerry loved going boating, fishing and traveling out west.

When he was forced to stop doing many of these things, he enjoyed the simple things in life.  He enjoyed sitting on his front porch watching fairground activities across the road, having a cup of coffee and visiting with those who would stop by.

He enjoyed watching Hawkeye football and basketball games on television, Iowa State too.  He also enjoyed NASCAR races, and shows like American Pickers and ones with antique tractors. He also enjoyed his quiet times.

Jerry loved spending time with family and many friends, coffee and conversation, the beauty of nature and quiet, peaceful moments.

Jerry is survived by his wife, Lavelle and his three children, Dan (Kristy) Fisher of Sioux City, IA; Stefanie (Phil) Porter of Arvada, CO; and Darren Fisher of Moville, IA; and grandchildren Jordan, Jenna, Jacob and Jase Fisher and Avery and Olivia Porter.

Jerry was preceded in death by his parents, Alvin and Elsie Fisher; his parents-in-law, George and Violet Henze; and a brother-in-law, Herman Maas.