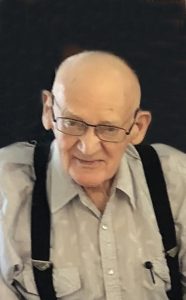 The Armstrong – Van Houten Funeral Home of Mapleton, Iowa, is in charge of the funeral arrangements. Condolences may be sent to www.armstrongfuneral.com.

Norman William Schmidt, the son of William F. and Emma K. (Hanson) Schmidt, was born on February 27, 1935, in Anthon, Iowa. He received his education in the Anthon Community School District. When his schooling was complete, he entered the workforce as a farmhand.

On July 17, 1953, Norman married Leona I. Kollbaum in Anthon. To this union four sons were born: David, Brian, Russell, and Scott. Norman continued to work as a farmhand for various farmers and was also employed in construction and as a factory worker throughout his lifetime. His

favorite job was working during his retirement years on the farm for Gary “Einar” Seuntjens.

Norman loved working with his horses and tinkering out in his shop. He enjoyed a competitive game of cards, putting puzzles together, and playing bingo.

“Stormin Norman” will be remembered by many for enjoying coffee with neighbors and his joking around.