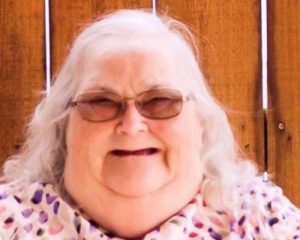 Sharon Ann Heath was born in Correctionville, Iowa, on Sept. 12, 1940, to Orval and Ada (Edwards) Heath. Sharon attended school in Correctionville.  She was active in the choir and band, and enjoyed playing the saxophone.

Sharon was involved in Girl Scouts and was a Rainbow Girl. Sharon enjoyed writing poems when she was in school and she wrote many poems for special events over her lifetime.

Sharon was united in marriage to Eldon Putzier on June 15, 1957. To this union, nine children were born; they later divorced.

Sharon met Steven Caskey at Mr. Donut and they were married on Aug. 1, 1986. Steve brought another daughter into the family. Steve passed away three days after Sharon.

Sharon spent many hours in her kitchen cooking for her clan. She taught Sunday school and was a Den Mother. Sharon also worked as a nurse’s aide.

Sharon also spent her time gardening, cooking, canning for her large family. Sharon enjoyed cooking and is known for her chocolate covered peanut butter balls, banana bread, and her jellies and jams.

Steve and Sharon joined the Church of Jesus Christ Latter-Day Saints, they were sealed together on July 26, 2006 in a Temple in Omaha.