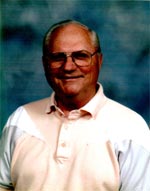 Homer “Pete” G. Stines, age 83, of Holstein, passed away on Sunday, December 6, 2020 at the Horn Memorial Hospital of Ida Grove.

A private family funeral service will be held at the Our Lady of Good Counsel Catholic Church of Holstein with the Msgr. Kenneth A. Seifried officiating.  Burial will be at Holstein Cemetery of Holstein with military rites conducted by the American Legion Dessel-Schmidt Post #225 of Holstein.

Pete joined the U.S. Air Force on September 21, 1954 for years of service and was stationed at McGuire Air Force Base in New Jersey.  It was there where he met the love of his life, Marie.

He was united in marriage to Marie Lillian Leonard on October 13, 1956 in New Jersey.  They lived in New Jersey for two years before moving to Correctionville, Iowa.  The couple lived in Correctionville until 1962 when they moved to Holstein.  Pete and Marie were blessed with four children.

After moving to Holstein, Pete worked at the Blue Eagle cleaning, tending bar and helping in the restaurant.  He then took a job at the Phillips 66 Station and ran the star route from Holstein to Carroll.

For four years Pete worked under Bill Ericksen at the Standard Station until he purchased the business, which he owned and operated for six years.

On August 1, 1973, Pete and Marie got their start in the shoe business by opening Das Schuhhaus.  In 1978 he built a shoe repair shop behind Das Schuhhas and cobbled shoes for 28 years before retiring in 2006.

Always a hard worker, in addition to running his business he worked part time for Barker Funeral Home.  He would spend his days at the funeral home and the nights at the shoe shop sometimes putting in 22-hour days.

In 1999 he was honored for 25 years of service to Barker Funeral Home and was presented the Holstein Good Neighbor Award.

After Nick and Sara Jensen purchased the funeral home in 2008 he worked part-time for them and was still a valuable part of their funeral home family until his death, coming in daily to help in any way that he could.  He was well known in Holstein and the surrounding communities as “Grandpa Pete,” and would always be seen with a smile on his face and was quick to greet others with a hug and a kiss on the cheek.

Pete loved gardening, making salsa and cooking, and he generously shared these things with others.  He also enjoyed fishing, spending time with family, delivering doughnuts and being “Mr. Politician,” visiting with everyone.  He was a member of the Holstein Kiwanis, the American Legion Dessel-Schmidt Post #225 of Holstein and was a volunteer for the Holstein Fire Department.  He was a longtime member of Our Lady of Good Counsel Catholic Church.

Pete was preceded in death by his parents; his loves of his life, Marie and their beloved dog, Sweet Pea; his siblings and several nieces and nephews.