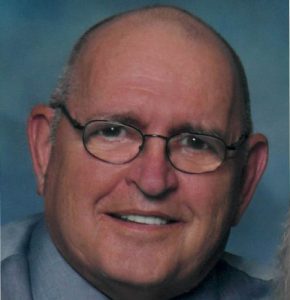 Memorial Mass was at 10:30 a.m. Monday, December 21 at St. Michael’s Catholic Church in Kingsley. Burial will be at a later date. Online condolences may be made at www.rohdefh.com.

John W. Galles was born in Kingsley, Iowa on Nov. 21, 1937, the third child of Roman and Iola Galles. Although he was a good athlete, the only sport he could play in high school was football. His other love was music and he played most brass instruments and sang in various groups.

After he was graduated, he went to Creighton and then to Wayne State College before joining his dad in the grocery business in Kingsley.

On June 11, 1962, he and Lois Taphorn were married in St. Martins Catholic Church at Odebolt, Iowa. After the Galles Market closed, he took a job with Rockower Brothers in their men’s clothing department. The family moved to South Carolina and then to Colorado Springs where they lived on Kingsley Drive.

The grocery business was in John’s blood and he was hired by Hy-Vee in Algona, Iowa. The family lived in Bancroft until John was moved to the Sioux City store. That brought them to Pierson and then back to Kingsley.

John and Lois had six children and 16 grandchildren. Family was always important to them and they hosted many family gatherings at their large home in Kingsley. Both Taphorn and Galles relatives were the recipients of their hospitality.

John was a great storyteller and loved to reminisce about growing up in Kingsley together with many stories about his time with Hy-Vee. John and Lois attended many ball games, first their children and then their grandchildren.

For years John announced the high school baseball and softball games and other sporting events. Many people will remember his imitation of Harry Carey as he sang “Take Me Out to the Ball Game.”

After retiring from HyVee, John was employed as a customer service rep for Gateway in South Dakota. In recent years, he became a courier with a local bank.

He was preceded in death by his son, Mark.