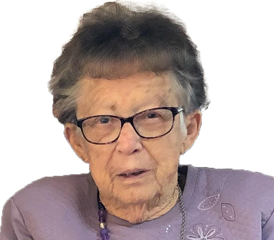 LaVonne M. Todd, age 97, of Cushing, passed away on Wednesday, December 16, 2020 at the AbiliT Senior Living of Holstein.

A private family funeral service will be held at the Nicklas D. Jensen Funeral Home of Correctionville with the Rev. Sheryl K. Ashley officiating.  Burial will be at the Cushing Cemetery of Cushing.  There will be no visitation.

LaVonne Myree Todd was born October 7, 1923 in rural Correctionville to Andy and Eva (Ward) Martin, the second of ten children.  She attended country school until high school and graduated from Correctionville High School in 1941.

LaVonne was united in marriage to Lloyd Otto Todd on February 14, 1942 in Sioux Falls, SD in front of the Justice of the Peace.  To this union three children were born: Marcia, Eugene and Roxann.

They farmed in the Cushing and Correctionville areas, retiring in 1980 when they moved into Cushing.  During retirement the couple enjoyed taking several trips to Alaska and wintered in Florida for many years.

LaVonne, better known as Bonnie, managed a beautiful flower garden filled with her favorite roses, Irises and Gladiolas.  She operated her own business, “Bonnie’s Candle and Macrame Shop,” where she made silk flower arrangements for weddings and other special events.

Candle making was a favorite pastime of hers. She was active in several card clubs and especially enjoyed playing bridge.

Bonnie was a 4-H leader for several years and loved attending the Woodbury County Fair.  As a quilter and gardener she entered many flowers and quilts in the fair for judging and won several blue ribbons along with a Grand Champion for one of her quilts.

LaVonne was a member of the First United Methodist Church in Cushing.  For many years she provided fresh flowers and floral arrangements for Sunday services.

She was preceded in death by her parents; her husband, Lloyd in 2011; sisters, Lucille, Jackie, Darlene and Sharlotte and a brother, Wesley, who died at age 1.