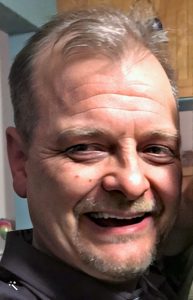 Services were held December 19 at 11 a.m. at Rohde Funeral Home

Mark was born February 19, 1969 in Cherokee, Iowa, the son of Harry and Anita (Bobolz) Mansfield. He was the second youngest of 5 children raised on their acreage outside of Pierson, Iowa. He graduated Kingsley-Pierson High School in 1987.

Following that he received his degree in Electronic Systems Maintenance in 1988 from WITCC. Mark enlisted in the Army National Guard on March 19, 1986 while in high school & proudly served his country until his retirement on May 1, 2002, achieving the rank of Staff Sergeant E6

Mark was the co-owner of AutoSound Solutions in South Sioux City, Nebraska, a business in which he took great pride and devoted so much time to build.  When he was not at work, you could find him working on his cabin or helping family and friends with their DIY projects.

Mark was a true jack of all trades with a wealth of knowledge that he patiently shared with his children and grandsons. He doted on his grandsons and took the role of Papa very seriously.

Words cannot express how greatly he will be missed.