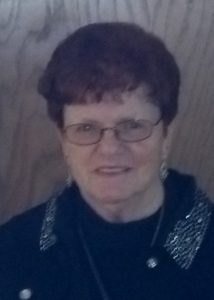 Mass of Christian Burial was at 11:30 a.m. Tuesday, December 22, 2020 at All Saints Catholic Parish – St. Joseph Church in Le Mars.  Reverend Bruce Lawler celebrated Mass.  Burial followed in Calvary Cemetery in Le Mars.  There was a Parish Rosary at 11:00 a.m.

Arrangements are with the Rexwinkel Funeral Home in Le Mars.  Expressions of sympathy can be extended to the family through www.rexwinkelfh.com.  In lieu of flowers, memorials can be made in Peggy’s name to Gehlen Catholic School.

Peggy Irene Barthole was born August 7, 1935 in Kingsley, Iowa, the daughter of Nicholas and Velma (Trout) Barthole.  She attended school in Correctionville, Iowa and graduated from Correctionville High School in 1954.  Following her graduation, she worked for Sioux Tools in Sioux City.

She was united in marriage to Art Poeckes on September 1, 1956 at St. Michael’s Catholic Church in Kingsley.  They lived for a short time in Remsen before moving to Pierson, Iowa.  In 1968, they purchased a farm near Kingsley and farmed until their retirement.  In 1998, they moved to Le Mars, Iowa.

She was a member of All Saints Catholic Parish in Le Mars.  Peggy volunteered at Plymouth Manor and the Le Mars Senior Center for several years.

She enjoyed walking and exercising.  She also enjoyed baking, cooking, line dancing, and playing cards.  Most of all, she loved the time spent with her family, especially her grandchildren.

She was preceded in death by her parents, Nicholas and Velma Barthole; her daughter, Diane Hemmelman; her siblings: Jerry (Janice) Barthole and Shirley (Bill) Heidesch; and a brother-in-law, Jim Woods.