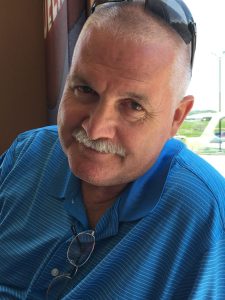 Steven Dale Bolton was born November 2, 1961 in Le Mars, Iowa, the son of Teddie and Valeria (Bainbridge) Bolton.  He grew up on a farm in Union Township in rural Plymouth County, Iowa.  He attended grade school at Union and graduated from Remsen Union High School in 1980.

Following his graduation, Steve started working at Marcus Lumber Company in January of 1981, and remained with the Leavitt family for almost 40 years.

On June 4, 1983, he married Donna Hansen.  They made their home on an acreage near Oyens, Iowa.  They had two children, Tim and Daniel.

Steve had a fond passion for International tractors and farm equipment, although he enjoyed anything that had to do with farming.

Steve volunteered on the Oyens Fire Department, starting in 1992.  As his children grew up, they learned from seeing Steve’s unselfish need to help others that they, too, were inspired to volunteer.  With his wife also signing on, they became a dedicated family with a commitment to serve others.

Steve was so very proud of his boys and the responsible men they became.  He was so happy when they married such special girls.  His grandchildren made him beam with joy!  He so loved his role of being a grandpa.

He loved all animals, including cattle and especially dogs.  If there was a dog to pet, he would spend the time he needed to give it a good petting.

Steve was preceded in death by his parents, Teddie and Valeria Bolton; his sister, Brenda Bolton; and a brother-in-law, Dan Rodriguez.