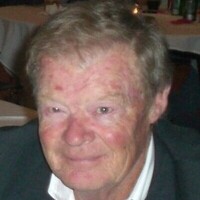 Jim will be interred at the National Cemetery in Omaha. Services will be private and for the immediate family only, due to concerns for the pandemic. Arrangements are under the direction of Waterbury Funeral Service of Sioux City.

James “Jim” Alfred Loftus was born in Sioux City, on Oct. 23, 1936, to Leo and Mary Loftus of Lawton, Iowa. Jim grew up in Lawton with his parents and his six younger siblings, Jay Loftus, Donald Loftus, William Loftus, Judith Ashcraft and Robert Loftus.

Jim married the love of his life, Marleen Joy Miller on May 9, 1958 in Sioux City. The couple lived for a brief time in Omaha, until Jim and Marleen returned to Sioux City, where they together raised their children, Kevin Loftus, Tim Loftus, and Kelly Loftus-Suponchik, and lived until this year, 2020, when Jim was diagnosed with lung cancer. Jim and Marleen raised their family as members of the St. John Lutheran Church in Sioux City.

Jim joined the Iowa Air National Guard’s 185th Air Refueling Wing (Guard) immediately after high school in 1955, and was activated for federal service in January of 1968. Jim went to Vietnam with the 185th in support of its 174th Tactical Fighter Squadron where Jim was an aircraft radio technician (Technical Sergeant) maintaining and repairing communications radios for the Unit’s F-100 fighter jets.

Jim was a wizard at repairing audio-visual equipment of all kinds and a “go-to guy” in keeping the F-100’s radios functioning properly. Jim loved airplanes and jets of all sorts and passed his free-time in Vietnam making tethered gas-powered model planes that he flew during his down-time.

Jim returned from Vietnam in 1969 and was awarded the National Defense Service Medal and the Vietnam Service Medal for his service in Vietnam.

Upon returning from Vietnam in 1969, Jim retired from full-time status with the Guard. He went to work for Goodwin’s, an audio visual repair service in Sioux City. In 1972, Jim and Marleen purchased Goodwin’s and operated it another few years until they moved their business to Nebraska Street in 1975 as Loftus Audio Visual.

Back when film was still a thing, Jim filmed and processed high school football games for Sioux City high schools and repaired the film projectors used in their classrooms. Jim and Marleen continued to operate Loftus Audio Visual until the mid-1980s.

Marleen had returned to college and graduated law school in 1987 and Jim re-enlisted with the Iowa Air National Guard in 1988 at the rank of Master Sergeant and went to work full-time for the 185th.

Jim retired after more than 37 years of service with the Guard in 1992. In retirement, Jim developed his hobby of collecting tools and donating them to those in need. With the inception of battery-powered hand tools, Jim amassed a most impressive collection of battery powered drills. No member of Jim’s family and friends or even his acquaintances went without receiving a battery-powered drill from Jim, at some point in their lives. Jim also loved antique tractors, and maintained a collection of models along with the occasional real one that he stored at his son’s with hopes of eventually getting one operational again.

Jim was a restless sort who always stayed busy. Whether it was repairing something broken or making something needed, Jim was always generous with his time, efforts and ideas. Even those who periodically called Jim a “curmudgeon,” knew him to be generous to a fault. Jim enjoyed people and loved to strike up conversations with anyone.

Jim donated his time to the Siouxland Soup Kitchen and was a board member for several years. Jim also maintained his love of airplanes, jets and tractors by donating his time and efforts to opening and maintaining the MidAmerica Museum of Aviation & Transportation with several of his Guard buddies.

In his retirement Jim devoted his time to his children, grandchildren and great-grandchild. Driving grandkids to and from school was something he just did out of habit.

Jim leaves behind his devoted wife, Marleen; his children, Kevin, Tim and Kelly; his grandchildren, Timothy (Ian) Loftus, Carson Loftus, Wyatt Loftus and Logan Loftus; and his great-granddaughter, Willa Loftus. Jim is survived by his younger brothers, Jay Loftus of Kelso, Washington and William (Bill) Loftus of Fort Worth, Texas.

Cards and memorials may be addressed to the Family of James Loftus, 17050 Seward Street, Omaha, NE 68118.