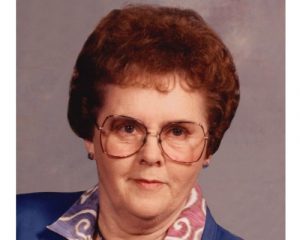 Justine, the daughter of Edward D. and Eva (Woodward) Miller, was born May 30, 1929 in Sioux City, Iowa.  Justine was raised in the Hornick area and graduated from Hornick High School.  In her early years, she babysat for several area families and nannied one year in Chicago, Illinois.

On May 5, 1950, Justine was united in marriage to Stewart “Duke” Hewitt Prichard in Worthington, Minnesota and this union was blessed with four sons.

After their marriage, Justine and Duke made their home on a farm near Hornick.  Through Duke’s work, the family lived in several different communities throughout the United States. For many years, Justine was a homemaker and was the office manager for the family business J.P.F. (Justine Prichard Farms) and Manufacturing.

She was still actively involved in the business.

Justine enjoyed baking and was known for her wonderful cinnamon rolls.  In addition, she enjoyed bird watching, gardening and in earlier years league bowling.  Justine loved visiting with people and reminiscing.  Above all, she cherished spending time with her family.

She was preceded in death by her parents; husband, Duke on August 23, 2019, one son, Jerry Prichard; one sister, Eunice (Orval) Lundeen; and one brother-in-law, Norman Nielsen.