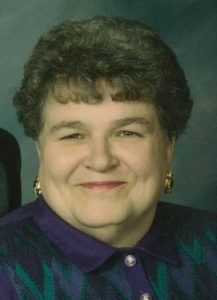 Funeral services will be held Thursday, December 31, 2020 at 11:00 a.m. at the Rohde Funeral Home in Kingsley, Iowa, with Pastor Barb Spaulding of Trinity Lutheran in Moville, Iowa officiating.  Burial will be at Arlington Township Cemetery in Moville, Iowa.  Masks and social distancing will be required at the funeral service. Visitation will begin at 9:00 a.m. Thursday with the family present at the funeral home.  Online condolences may be sent to rohdefh.com.

Lucille Irene Dahl was born July 5, 1939 to Carl and Ellen (Christensen) Dahl, Soldier, IA.  She was born in the same house as her mother, Ellen, twenty years previous.  She grew up on a farm west of Soldier, IA. She was baptized in the First Christian Church of Ute, Iowa, graduating from Soldier High School in 1957 and moving to Sioux City, Iowa, where she worked at Security National Bank.

In 1958, she met Ervin Zellmer at a dance at Shore Acres in Sioux City. Lucille and Ervin were united in marriage on April 12, 1959 at Onawa Christian Church.  She became a member at Trinity Lutheran Church of Moville, Iowa.

After living in Sioux City for a couple of years, she and Ervin settled on a rural Lawton farm that Ervin had grown up on and farmed.  In 1971, they moved to a farm west of Kingsley where they made their home.  Although Lucille was remarkably busy raising four children working on the farm helping Ervin, she found time to be active outside of the home and farm work.

Lucille was incredibly involved with the Trinity Lutheran Church of Moville, the women’s circle, and served as coordinator for the Cluster.  She enjoyed growing and arranging flowers, painting and crafts.  She was active and held numerous positions in clubs which include the Kingsley Federated Garden Club, TOPS, Siouxland Iris Society, and Country Crossroads Decorative Painters.  She always enjoyed visiting with people and made friends wherever she went.  Lucille was a Master Gardener and judged fair entries at the Plymouth and Woodbury County Fairs.  Lucille and

Ervin were blessed to be able to celebrate their 60th wedding anniversary in April of 2019.  She loved spending time with her family and friends.

Lucille was preceded in death by her parents, Carl and Ellen Dahl; her husband, Ervin; her baby sister, Karen Lou Dahl; her parents-in-law, Otto and Bertha Zellmer; brothers-in-law, Harold and Don Zellmer; and a sister-in-law, Barb Zellmer.
In lieu of flowers memorials may be directed to the Trinity Lutheran Church.