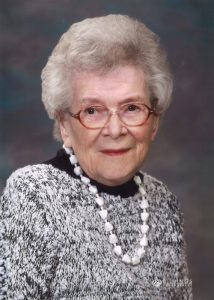 A funeral service was held on Monday, January 4, 2021 at 1:00 PM at the Nicklas D. Jensen Funeral Home of Correctionville with Pastor Clif Cockburn officiating. Burial was at the Willow Township Cemetery of Holly Springs.

She was married to Lee Leonard Pry on February 8, 1942 at South Sioux City, Nebraska. Lee was in the service during World War II and she moved with him to Arkansas and Kentucky while he was going through two years of training.

While Lee fought in France and Germany, she lived in Sioux City taking care of her two small children and working for a time in a packing plant. Lee and Betty lived in Sioux City from 1945 until 1962 with Lee working at Swift’s Packing Plant and Betty, for most of that time, being a full time homemaker.

Betty and Lee had 12 children, seven boys and five girls, three of which are now deceased.  Betty was devoted to her family and very proud of all of her children.

In 1962, Betty and Lee moved to a farm south of Correctionville.  They were dairy farmers and milked cows until 1978.  In 1989, they sold the farm and moved into Correctionville at 312 Birch Street where she continued to reside after Lee’s death in 1998 until she moved to the Care Center a few years ago.

Betty took nursing assistant training at St. Joseph’s in Sioux City and worked there for a few years following her training.  From there she was a nursing assistant at Sunrise Manor, Sioux City for seven years and in September 1976, Betty joined the Colonial Manor staff in Correctionville, where she worked until her retirement.

Betty always had a special place in heart and life for the Lord, Jesus Christ.  She was a member of the Greenville Evangelical Free Church in Sioux City and upon moving to Correctionville in 1962, she became a member of the Church of Christ.  Besides taking care of a family with 12 children, working full time and helping out on the farm, Betty still found time to volunteer at the Church and at the Care Center and to pursue her hobbies.  Betty’s passion was being a Sunday school teacher and working with the elderly.

She loved to crochet and made numerous afghans and other items.  She traveled a good deal, having visited all of the states in the Continental U.S., Canada, Mexico and Israel.