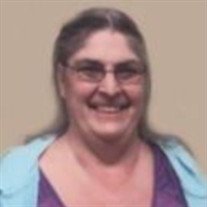 Kimberly Ann ‘Kim’ McHenry, 63, of Sioux City, IA, passed away on Friday, December 25, 2020 at Sanford USD Medical Center in Sioux Falls, South Dakota, with her daughters by her side.

Funeral service were at 11:00 a.m. Saturday, January 2, 2021 at Christy-Smith Funeral Home, Morningside Chapel. Private family burial will be at Ida Grove Cemetery at a later time.

Kimberly (Kim) was born on July 10, 1957, in Ida Grove, IA, to Robert and Evangeline (Lane) Moeller. She graduated from Lawton-Bronson High School in 1976.

Kim enjoyed spending time with her children, grandchildren, friends and family. She especially loved her time with her best friends Doreen Chamberlain and the late Rita Rahn for a dinner out or a night of Karaoke. She was an avid Sioux City Musketeer fan for many years (Hockey Mom to many). She loved dirt track racing, the Denver Broncos and Iowa Hawkeye football, watching local bands, going to concerts, helping out with the NAIA and storm chasing. All while raising her children and grandchildren to do the same.

Her passion was photography; from everyday photos, to senior pictures, weddings, and action shots at Interstate Speedway (now Raceway Park) and the Tommy Bolin Music Festival.

Kim was a people person; she loved meeting new people and being able to interact with everyone. She loved all animals and spoiled any that she came in contact with, especially her puppy Patches.