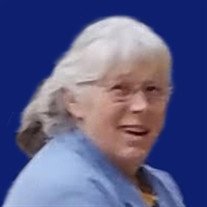 Services were at 10:30 a.m. Monday, January 4, 2021 at Christy-Smith Funeral Homes, Morningside Chapel, Burial will be in Memorial Park Cemetery.

Peggy was born on October 13, 1954, in Sioux City, to Alvin and Betty (Durigan) Christiansen. She was baptized and confirmed in the Lutheran faith. Peggy graduated from Lawton-Bronson High School.

She worked at Sioux City Parks and Recreation as a gardener for many years. Most recently she was employed as a housekeeper at Briar Cliff College for the last 11 years.

Peggy enjoyed gardening and woodworking. She had a love for dogs and horses. She also loved watching westerns, especially Gunsmoke, of which she was on Series 9.

Peggy always had a smile on her face and was a very hard worker.

Those left to honor her memory include numerous cousins and a special friend, Brenda Garcia.

She was preceded in death by her parents and a brother, Michael.