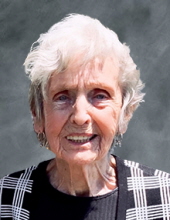 A Private Family Memorial Service was held at the Armstrong-Van Houten Funeral Home of Mapleton, Iowa. Msgr. Mark Duchaine officiated. A Celebration of Life and burial will be held at a later date. The Armstrong – Van Houten Funeral Homes of Anthon and Mapleton, Iowa, was in charge of the funeral arrangements. Condolences may be sent online to www.armstrongfuneral.com.

JoAnn Groth, the daughter of George H. and Catherine L. (Bosch) Finzen, was born on January 4, 1935, in Woodbury County, Iowa. She grew up in Anthon, Iowa and as a youth spent countless hours at the gravel pit searching for toads. JoAnn attended St. Joseph’s Catholic School in Anthon till 8th grade and then Anthon High School graduating with the class of 1953.

JoAnn worked at various jobs after high school including the local hardware store and the mink farm.

On February 19, 1955, JoAnn was united in marriage to Lyle E. Groth at the St. Joseph Catholic Church of Anthon. The couple was blessed with three sons: Daniel, Patrick and Michael. The family made their home on the farm near Climbing Hill, Iowa, where Lyle was a grain and livestock farmer and JoAnn was a homemaker.

JoAnn enjoyed spending time outside on the farm tending to her flower beds. She liked taking the boys to the creek to fish as well as teaching them to care for their pets.

JoAnn enjoyed cooking meals and taking them to the guys when they were working in the fields. She also enjoyed going uptown for coffee with her friends.

JoAnn treasured time with her family. She will be dearly missed by those who knew and loved her.