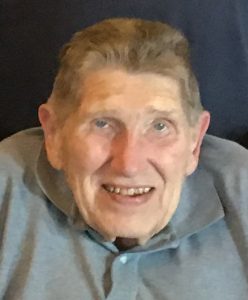 Dick grew up in Anthon, Iowa and graduated from Anthon High School.  His first job in Anthon was at the town grocery store where he delivered groceries to customers in his wagon.

After high school, Dick started working in Sioux City then he enlisted in the United States Army.  He served during the Korean War until his honorable discharge.  After serving in the military, Dick returned to Sioux City and worked at Armour’s.

While working at Armour’s, Dick met Billie J. Foster and they were united in marriage on June 1, 1963 in Sioux City.  This union was blessed with two daughters.

The family made their home in Sioux City and Dick worked at Concrete Pipe Machinery Co., White Drug Sick Room Service, and Mullin Awning and Siding until his retirement.

Over the years, Dick and Billie enjoyed playing cards and square dancing.  Above all, Dick loved spending time with his grandchildren.

He was a member of St. Michael Catholic Church and the Sergeant Bluff American Legion.

He was preceded in death by his parents; his wife Billie on June 7, 2004; and one brother, John “Jack” Chicoine.