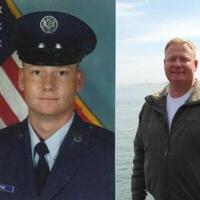 Charles “Chuck” Kenneth Loftus was born November 11, 1970 in Sioux City, Iowa to Ronald and Connie Loftus. Chuck started school in Sioux City at Crescent Park elementary school before moving to Moville with his family in 1978 to attend Woodbury Central and graduated in 1989. He was an athlete, playing baseball, basketball, football, wrestling and track for Woodbury Central.

Chuck and Cynthia (Keenan) married in 2000 and had two daughters; Kaylee and Gracie soon after. They loved their daddy very much and live in Oklahoma were Chuck and Cynthia settled after Chuck’s retirement.

Chuck enlisted in the United States Air Force shortly after graduation and trained to be a jet engine mechanic. Chuck served in the Persian Gulf theatre. He had been stationed at McConnell AFB Kansas, Bentwaters AFB England, Tinker AFB Oklahoma and Travis AFB CA throughout his 22 year career before retiring as Master Sgt, E7, in 2012.

Chuck was also an avid rider of motorcycles and snowmobiles often found riding around town or racing at tracks around Siouxland.

Everyone knew the Loftus boys were popular for drag racing, motocross and fast cars. His sense of humor is memorable.

Chuck is survived by his former wife, Cynthia Keenan of Edmond, Oklahoma; two children, Kaylee and Gracie; his mother, Connie Loftus of Salix; his father, Ronald Loftus of rural Galva; his twin brother, Robert Loftus of IL, other relatives and many friends. Stan, Gloria and Brent Flewelling were a very large part of Chuck’s family as well. (Chuck and Brent were inseparable and if you saw one you knew the other was close by).

Chuck is preceded in death by his grandparents, Arthur and Dorothy Loftus, Kenneth and Esther Bottolfsen; and his sister, Gail Loftus-Hinkel.