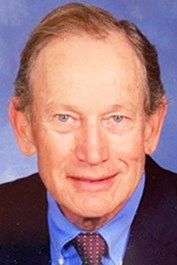 Troy was born May 15, 1937, in Sikeston, Missouri, to Charles and Edith (Ayers) Calhoun. He graduated from Sikeston High School and then attended Southeast Missouri State University in Cape Girardeau, Missouri.

He later transferred to University of Missouri at Rolla, Missouri, where he earned his degree in Electrical Engineering.

Troy married Sandra J. Stormer September 6, 1958 in St. Louis, Missouri. Troy worked for the Tennessee Valley Authority in Chattanooga, Tennessee; McDonald Aircraft in St. Louis, Missouri; B.F. Goodrich Chemical Co. in Paducah, Kentucky. He then relocated to Sioux City in 1969 where he worked at IBP until he retired in July 1993. In August of 1993, Troy and Sandra moved to Russia for two years doing Christian Missionary work.

After their return to Lawton, Troy began farming, never fully retiring until his health failed.

Troy was an active member of Southern Hills Baptist Church, where he served as a Deacon. He enjoyed traveling in their motorhome, hunting, boating, camping, horseback riding and spending time with his grandkids.

Troy was preceded in death by his parents; two sisters, Lawanda Lee Compton and Charlotte Ann Pierson; and his twin brother, Travis Calhoun.