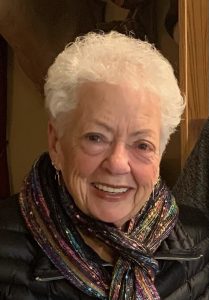 The Mauer – Johnson Funeral Home in Le Mars is assisting Dorothy’s family with funeral arrangements.  Expressions of sympathy may be directed through www.mauerjohnsonfh.com

Dorothy Ann Ruhland was born on November 24, 1938, in Kingsley, Iowa, the daughter of Frank and Blanche (Timmins) Gollhofer.  She attended school in Kingsley, graduating from high school in 1957.  Following graduation, Dorothy attended nursing school in Sioux City, Iowa, and later worked in Sioux City as a telephone operator.

On August 24, 1960, Dorothy and Dale Kessenich were married at St. Michael’s Catholic Church in Kingsley.  They made their home on a farm near Neptune, Iowa.

Dorothy and Dale farmed together until they moved to Le Mars in 1979. Dorothy then took a position in the kitchen at Gehlen Catholic Schools.  She later worked for a brief time at Brentwood Good Samaritan Home as a nurses’ aid.  She finished her career at Floyd Valley Hospital as supervisor of the housekeeping staff.  Dale passed away on June 29, 1999.

On November 11, 2000, Dorothy and Larry Ruhland were married at St. James Catholic Church in Le Mars.  They made their home in Le Mars.  Dorothy then became “head cook” at Guardian Angel Preschool and Daycare. All of the children knew her as “Grandma Dorothy.”  She was a member of All Saints Parish, a member of Catholic Daughters of the Americas and recited the rosary daily.

Throughout her life she was an accomplished seamstress and quilter, donating many of her creations.  She enjoyed fishing, cooking and baking.  She closely followed the activities of her grandchildren and great-grandchildren and held an annual grandma and grandpa day.  Faith was very important to Dorothy and she spent many hours in perpetual adoration at her church.  Along with playing cards and Dominoes, Dorothy would take an occasional trip to the casino.  She also enjoyed an occasional “flu shot”.

She was preceded in death by her parents; her husband, Dale; and brothers, Duane, Jim and Randy.

Memorials may be directed to Gehlen Catholic Schools in Le Mars, Iowa.