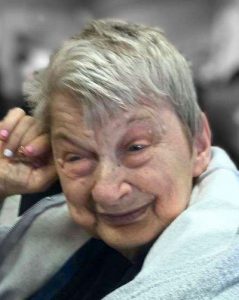 Elizabeth Jean “Betty” Berger, 80 of Correctionville, formerly of Sioux City, passed away on Saturday, January 23, 2021 at a local nursing facility.

Catholic Prayers will be shared by Deacon Bruce Chartier at 10:30 a.m. Thursday, January 28th at Meyer Brother Colonial Chapel with burial to follow at Calvary Cemetery. Online condolences may be offered at www.meyerbroschapels.com  Memorials may be offered to Mid-Step Services or Goodwill of the Great Plains in Betty’s name.

Betty was born on December 18, 1940 in Sioux City to Clarence and Selma (Ringler) Berger.  She received her education in the Sioux City Public School system.  Betty has been a long-time resident of both Goodwill Industries and Mid-Step Services in Sioux City, and most recently moved to Correctionville Specialty Care. She enjoyed participating in Goodwill Day programming.

Betty enjoyed participating in social activities in where she could have a good time.  She had a great sense of humor and loved giving her staff and friends a hard time.  Betty also enjoyed bingo, rocking in her chair, and spending time with her roommates.  She enjoyed going to the hair salon and chatting with the ladies, along with going out for dinner with close friends.

Betty is survived by four sisters, Mary Ann Scheve of Aurora, CO, Elaine Harms of Sioux City, Helen Schmitt of Aurora, CO, and Joyce Anderson of Liberty Hill, TX; one brother John (Sandy) Berger of Newcastle, NE; sister-in-law Janet Berger of Arkansas; many nieces and nephews; and three long-time roommates whom she resided with for many years.