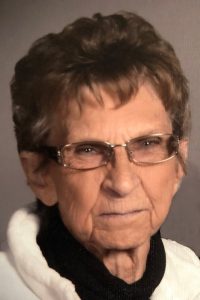 Private Funeral Services were at Meyer Brothers Morningside Chapel on Monday, January 25, 2021 with burial to follow at Memorial Park Cemetery.  Online condolences may be offered at www.meyerbroschapels.com

LaJune, the daughter of Henry and Ida (Hesse) Kollbaum, was born on September 16, 1944, in Anthon, Iowa.  She attended school in Anthon until her family moved to Bronson when she was in the eighth grade.  She graduated from Bronson Community School in 1962.

In September of 1962, June met Thomas Gray and on May 8, 1964, they were united in marriage at St. Paul’s Lutheran Church in Sioux City.  They lived in Sioux City for eight years until deciding to enjoy a quieter life on a small acreage outside of Moville where they resided for 17 years before returning to Sioux City.  Along the way, they were blessed with three children: Kevin, Kelly, and Kari.

June worked a number of jobs: including waitressing, owning her own business with her sister Roberta, and working side-by-side with Tom at Record Printing Company for over 35 years.

Throughout her life, June enjoyed gardening and tending to her flowers. She always had a project going somewhere in her yard where she and Tom would spend their summer days enjoying the outdoors and especially each other. You would very seldom see June without Tom or Tom without June. In fact, June and Tom or Mom and Dad or Grandma and Grandpa could have almost been considered a single word. Their marriage personified the example of commitment, love, and togetherness.

One of June’s legacies is her cooking. Holidays—especially Thanksgiving—brought great joy to everyone in her family. June was at her finest when she was doing what made her happiest: serving other people in her kitchen. It is not difficult for family to decide on a favorite of her dishes. Her culinary legacy would have to be the potato salad she took so much pride in preparing.

Mostly though, June enjoyed spending time with her family: playing cards and visiting with her siblings and their spouses, enjoying time with her three children, and attending the many athletic events of all of her grandchildren.  June was committed to her siblings, helping care for them in their times of need. She was loving as a mother, always there to listen and provide a helping hand. And she was passionate about her grandchildren, wanting to know what was going on in their lives and how she could support it.

A private family service will be held at the Meyer Brothers Morningside Chapel in Sioux City on Monday, January 25, 2021.

June will forever be remembered as a loving wife, caring mother, and dedicated grandmother. Rest in peace; we will miss you dearly.