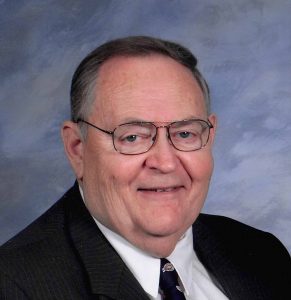 John Henry Groth, 80, died January 30, 2021 at Reflection Living in Dodge City.  He was born on April 5, 1940 at Correctionville, Iowa the son of Elmer and Inez (Franzen) Groth.
Funeral Mass will be held at St. John the Baptist Catholic Church on Saturday February  6, 2021 at 10:30 AM with Rev. John Forkuoh and Rev. Ted Stoecklein presiding.  Burial will follow at St. John’s Cemetery in Spearville.  Visitation will be at Swaim Funeral Chapel in Dodge City on Friday, February 5, 2021 from 12:00 PM to 8:00 PM, with the family receiving friends from 6:00 to 8:00 PM. In lieu of flowers memorials are suggested to Spearville Knights of Columbus Council #1539 in care of the funeral home.  Thoughts and memories may be shared in the online guest book at www.swaimfuneralhome.com.
Mr. Groth received his education from Climbing Hill High School in Climbing Hill, Iowa and then attended and graduated from the University of Northern Iowa with a Masters Degree. He married Bernice Lea Robinson on April 30, 1960 at the Immaculate Conception Catholic Church in Moville, Iowa, she preceded him in death on May 22, 2020. Mr. Groth served on the Spearville School Board, Spearville Hospital Board and was a member of the Spearville Lions Club.
He was a member of St. John The Baptist Catholic Church, Honorary Life Member of the Knights of Columbus Council #1539 both of Spearville, as well as a member of the Alumni Association of the University of Northern Iowa.
He is survived by his three sons Douglas Lee Groth and wife Jennifer of Cincinnati, Ohio; Robert Lynn Groth of Dodge City; James Alan Groth and wife Susan of Dodge City. by six grandchildren Joseph Leonard Vasquez and wife Jordan of Midland, Texas, Amy Leigh Groth of Hamilton, Ohio, Lauren Nicole Groth of Independence, Missouri, Jamie Rae Groth of Lawrence, Brian Christian Groth and Brett Michael Groth of Hays. He is also survived by three brothers Leo Groth of Moville, Iowa; LaVere and wife Marcel Groth of Alamo, Texas and Mark and wife Ruth Groth of Anthon, Iowa; sister LaDonna and husband Alan Peters of Sioux City, Iowa, sister-in-law Patricia Robinson of Sioux City, Iowa.
He was preceded in death by his parents and one brother Lyle Edward Groth.
Posted in Obituaries