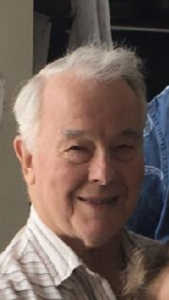 Gaylen A. Demarest, age 84, of Cushing, passed away on Thursday, February 4, 2021 at the Select Specialty Hospital of Omaha.

A family gravesite service was held at the Cushing Cemetery of Cushing, with military rites conducted by the F. Roger Baumann Post #624 of Cushing. A visitation was held on Monday, February 8, at the Nicklas D. Jensen Funeral Home of Correctionville.   Online condolences can be made at nicklasdjensenfh.com.

Gaylen A. Demarest was born November 25, 1936 three months early in a farmhouse 2 miles South of Cushing to Harold and Clara (Goodburn) Demarest weighing in at less than three pounds. With no hospitals or incubator to keep him alive, they kept him warm putting him in his father’s shoebox on the oven door and bathing him in his mother’s stone bread bowl.

In 1940, they moved ¾ of a mile down the road to where he lived the rest of his life. In 1955, Gaylen’s father presented him with his diploma from Cushing High School.

Upon graduation, he attended Iowa State University for two quarters then joined the U.S. Army.  After basic training, he was stationed in El Paso, Texas in the corporal missile division.

In 1958, Gaylen was united in marriage to Myrtie Robson. To this union four children were born: Rick, Mark, Paul and Lori. They farmed the home place in Cushing for 60-plus years.

Gaylen was always very active in church and Bible studies. He accepted Jesus as his Lord and Savior at the age of 12 at St. John’s Lutheran Church of Cushing. Gaylen’s faith took on added significance in the early 1970s as he leaned into the Holy Spirit’s presence and power.

He was preceded in death by his parents Harold & Clara; brother, Darrel; sisters, Laurel and Donna; a son Paul and 3 miscarried babies.

As a memorial to their grandfather, the children, grandchildren, and great grandchildren built the casket out of trim boards from the house Gaylen lived in for most of his life. It is built in the shape of the Lincoln car emblem, his favorite car!