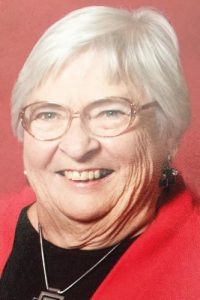 Constance “Connie” Sorbe, 85, of Quimby and formerly of Alta died on Monday, Feb. 1, 2021 at the Manilla Manor in Manilla, Iowa.

Private burial will take place in the Memorial Park Cemetery in Sioux City. A Celebration of Life will be held at a later date. The Fratzke & Jensen Funeral Home in Alta is in charge of the arrangements.

Constance Louise Sorbe, the daughter of James and Marie (Foley) Jones, was born on Nov. 7, 1935 in Charter Oak, Iowa.

Connie and her husband John Chicoine settled in Alta to operate The Liar’s Club for many years. Later in her working career, Connie owned and operated Connie’s Bar & Grill in Quimby with her husband, Eldon Sorbe.

Connie was very active in her community and was a member of numerous organizations & celebrations including Delta Zeta Sorority, Girl/Boy Scout Leader, on Quimby City Council, Watermelon Days, Quimby Library Board, and St. Patrick Celebrations providing her famous corned beef and cabbage. In her early years, Connie was active in musicals and plays, was an avid bowler, golfer, reader, and bridge player. She also was a talented seamstress which included working on family clothes, seat covers for her Volkswagen Bug, and costumes for dance recitals.

Connie was preceded in death by her parents, Art and Marie Jones; her husbands, Eldon Sorbe and Jack Chicoine; a brother, Jim Jones; a sister, Kay Peterson; and a son-in-law, Kent Hilsabeck.