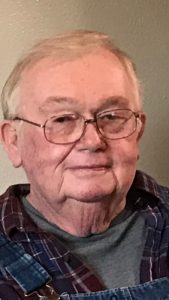 A funeral service will be held on Saturday, February 20, 2021 at 10:30 AM at the Grace Lutheran Church of Correctionville with Pastor John Riebhoff officiating.

John Raymond Jacobs, Sr. was born June 22, 1942 at the Schriner farmhouse near Correctionville, Iowa to Clifford and Wanda (Ashmore) Jacobs. John was homecoming king of his 1960 graduating class at Correctionville High School.

After graduation he joined the United States Navy and was stationed in San Diego, California for four years. After returning home from the Navy, John worked at the Standard Station for 18 years, then became the River Valley Community School District’s transportation director.

On January 9, 1962, John was united in marriage to Gayle Goodmanson at the Evangelical United Brethren Church in Correctionville. They were blessed with four children.

John loved to garden. He was a member of Grace Lutheran Church and he had been active with the Boy Scouts of America.

He was preceded in death by his parents, Clifford and Wanda; his grandparents, Fred and Sadie Jacobs and Fred and Marie Ashmore; a brother-in-law, Tom Rowse; aunts and uncles, Fred and Doris Briese and Wayne and Wilma Jacobs.