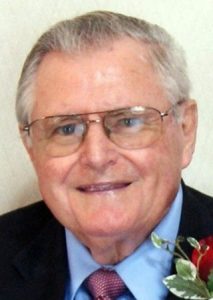 He was born November 20, 1929 to parents Robert and Beulah Atkinson in Kingsley, Iowa. Roger graduated from Kingsley High School in Kingsley, Iowa (1948), he received his degree in Agriculture from Iowa State College 1952.

He served in the United States Air Force in Great Falls, Montana from 1952-1954. He married Louise M. Atkinson (nee Crecelius) on March 23, 1952. He began his career as a grain elevator examiner with the Department of Agriculture in 1954. He remained an employee of the Dept. of Agriculture for 30 years.

Mr. Atkinson is survived by his son, Robert W. (Rebecca); his son, David P. (Diana); his son, Stephen P.; his three grandchildren: Elisabeth Adams (nee Atkinson), James Atkinson and Thomas Atkinson; five great grandchildren; several nieces and nephews, and other close friends. He was preceded in death by his wife, his parents, and his sister.

Mr. Atkinson was a man of great faith and was a member of Calvary Baptist Church until his passing. He enjoyed spending time with his friends and family. He was a life-long fisherman who loved to fry up his latest catch for all to enjoy.

He will be remembered as a truly kind and generous man with a very infectious laugh.

There will be no visitation, but memorial service to be announced at a later date. For inquiries, contact Diana Atkinson at RogerAtkinson MemorialInfo@gmail.com.

In lieu of flowers, donations can be made in his name to Shepherd’s College (https://www.shepherdscollege.edu) or Meadows Association (http://www.meadowsresidential.com/meadows_association).