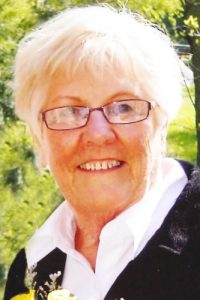 Marlene Harriet Foxhoven, 86, of Ida Grove passed away on Wednesday, March 10, 2021, at the Horn Memorial Hospital of Ida Grove.

Per Marlene’s wishes, cremation has taken place. No services will be held at this time. A Memorial Service will be held at a later date. The Christensen-Van Houten Funeral Home of Ida Grove is in charge of the funeral arrangements. Condolences may be sent online at www.christensenvanhouten.com.

Marlene Harriet (Lubbers) Foxhoven was born to Alfred and Hilda (Cleveland) Lubbers in Sioux Center, Iowa, on May 14, 1934. She graduated from Sioux Center High School in 1952. Marlene married Vernon Kahl and had four children: Pam, Larry, Gwen, and Dan.

They lived in Moville, Iowa, for 20 years. During that time, she was a Scouts and Brownie leader, involved in church activities, and was president of the Jayceettes.

In 1976 she married Frank Orr, who passed away in 1985.In 1986 Marlene married the love of her life, Dennis Foxhoven. The couple moved to Ida Grove in 1990. She was a member of the First United Methodist Church.

Denny introduced her to golf and they were members of the Ida Grove Country Club where she made a hole-in-one. She greatly enjoyed the many two-ball tournaments that she and Denny participated in.

Besides golf, she loved trying new recipes, tending to the flower garden, shopping, pinot grigio, crossword puzzles, sudoku puzzles, watching sports on TV with Denny, and spending time with family and friends. She missed seeing her grandchildren during the COVID-19 pandemic.

She was preceded in death by her parents, Alfred and Hilda Lubbers; brothers Alroy, Roger, and Kenneth Lubbers; and a daughter, Gwen Robinson.