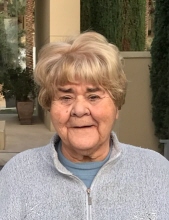 Suzanne S. Shattuck, age 80, of Sioux City, Iowa, (formerly of Mapleton, Iowa), passed away on Monday, March 8, 2021, surrounded by her loved ones in Smithland, Iowa.

Suzanne S. Shattuck, the daughter of Archie and Delores (LaCroix) Worrell, was born on June 10, 1940, on a farm near Salix, Iowa. The family relocated to Oto, Iowa, during Suzanne’s youth and she received her education in the Oto and Smithland school districts. She graduated from Smithland High School with the class of 1958.

On May 5, 1962, Suzanne married Wesley “Wag” A. Shattuck in Sioux City, Iowa. The couple welcomed four children: Scott, Kevin, Missy, and Stacey. Suzanne and Wesley raised their family on various Air Force bases throughout the world, and during this time, Suzanne sold Avon.

After retiring in 2005 the couple settled in Mapleton, Iowa. Suzanne had a love for shopping. In life, family was the most important thing to Suzanne. She treasured every moment with her family, especially spending time with her grandchildren.