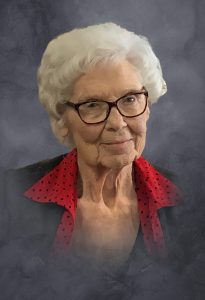 Visitation (Without Family Present) was from 4:00-7:00 PM on Tuesday, March 23, 2021 at the Immanuel Lutheran Church in Schleswig, Iowa. Private Family Service was Wednesday, March 24, 2021 also at the church. Interment is in Morgan Cemetery in Schleswig.

Leila Reimer was born February 23, 1930 in Mapleton, Iowa, the daughter of Jake and Katie (Henning) Hesse. She became a baptized child of God on April 2, 1930 at her home in Mapleton and later confirmed her faith at St. John’s Lutheran Church in Charter Oak, Iowa on April 18, 1943.

Leila attended St. John’s Parochial School in Charter Oak for eight years and Mapleton High School for four years. After graduation, she attended Cosmetology School in Sioux City for one and a half years.

On September 5, 1948, Leila was united in marriage to Gayland Hamann at St. Paul’s Lutheran Church in Midway. To this union, five children were born: Sheldon, Kathy, Patty, Lyndon and Clinton. In 1995, Gayland passed away from a lengthy illness.

On March 29, 1997, Leila married Robert Reimer at their home in Denison and his children, Mary Lynne, Judith, Robert Hugh and Amy Jo became part of her family.

Leila passed away on Saturday, March 20, 2021 at Maple Heights Nursing Home in Mapleton, Iowa attaining the age of ninety-one years and twenty-five days. In addition to her parents, she was preceded in death by her husbands, Gayland Hamann and Robert Reimer; sisters, Marge Maxfield and Vera Bennett; brother, Fred Hesse; one step-son, Robert H. Reimer, M.D.

In lieu of flowers, memorials may be directed to the Immanuel Lutheran Church in Schleswig.