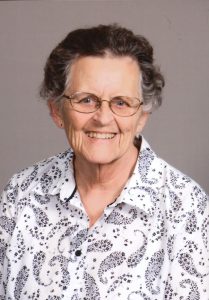 Armstrong – Van Houten Funeral Home of Anthon, Iowa, is in charge of the funeral arrangements. Condolences may be sent online to www.armstrongfuneral.com.

Beulah was born on December 27, 1939, the daughter of Carl and Opal (Scott) Siefke. She was married to Robert Ardel Botcher in which they had 3 children.

Beulah worked part-time as a Postal Clerk until she became the Postmaster of the Anthon, Iowa Post Office. She was a very active member in her community.

Beulah helped organize The Little Sioux Valley Country Picnics and was on many Centennial Committees.

She served on the Anthon City Council for several years and was an active member of the Anthon Women’s Auxiliary.

Beulah was an excellent cook and baker.

Beulah was preceded in death by her parents, Carl and Opal Siefke; an infant sister, Bernice Siefke; a sister, Janet Jenkins; a brother, Bernard “Butch” Siefke; her first husband, Robert Ardel Botcher; and her parents-in-law, Nick and Opal Sand.