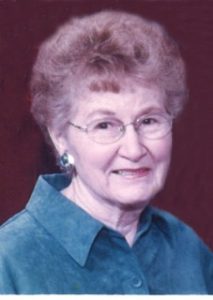 Faye M. Hinkhouse, age 89, of Correctionville, passed away on Wednesday, December 2, 2020 at the Colonial Manor of Amana, Iowa.

Faye Marie Hinkhouse was born October 13, 1931 on a farm northwest of Anoka, NE to Warren and Sadie (Hammerlun) Fusselman the fourth of five children. The family moved to Bristow, Nebraska in 1934. Faye attended school in Bristow, graduating valedictorian in 1949 from a class of six.

After high school, she attended Wayne State College in Wayne, Nebraska, where she earned an Elementary Teaching Certificate in 1951.

Faye taught grade school in Anthon, Iowa and then a year and a half in Correctionville until she began a family. She returned to teaching when her children began school, teaching at Eastwood Comm. School (Correctionville and Cushing, Iowa). After 25 years, she retired from teaching in the early 1990’s.

Faye was united in marriage to James “Jim” Edward Hinkhouse on January 17, 1954 in Bristow, NE. They honeymooned in Norfolk, NE then moved to Correctionville where they would make their home. The family moved to four different homes in Correctionville while raising their three children, Shari Lu (1956), Kurt Loyd (1958) and Jay James (1959) until moving to that “big” house near downtown in 1972.

Jim and Faye were married for 52 years. In January 2013, she moved to Lakeview Assisted Living in Amana, Iowa and moved just down the hall to Colonial Manor of Amana in September 2017.

Faye was a lifetime member of the American Legion Auxiliary, where she served for some time as president. She was a member of the Loess Hills Order of Eastern Star, the Town and County Women’s Club, the Rural Woodbury County Historical Society, National Education Assn, the Iowa State Teachers Assn and the Correctionville Library Board. She was a former Girl Scout leader.

Faye was an active volunteer in the Correctionville community. In 2003, she and Jim were named Citizens of the Year by the Correctionville Chamber of Commerce. Faye wrote grants to procure funds to help repair and restore areas of the Vets Center. She loved gardening and for many years took care of the flowerbed downtown, just east of the current Museum. She also cared for the flowerbed on the south side of the E.U.B. Church before it merged and helped take care of flowers for Sunday services at Grace United Methodist Church.

Faye was very proud of her children and grandchildren.

The family would like to recognize all the great staff at the Amana Retirement Community (Lakeview Asst. Living and Colonial Manor of Amana). We are happy she could spend her last years there. The staff told us many times that Faye was one of their favorite residents.