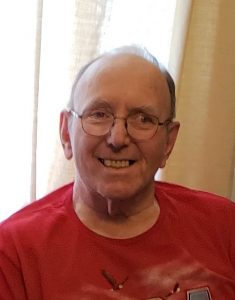 Don was a true pioneer, born March 25, 1940 in a sod house in Hayes County, Nebraska to Earl and Joyce (Gardner) McGregor. After graduating from high school he earned a bachelor’s degree from Kearney State College.

Don was united in marriage to Virginia McGregor on June 23, 1973 in Sioux City, Iowa. They were blessed with two children, Donita and Doug.

He was an industrial arts teacher at Woodrow Wilson Jr. High and a custodian at CWO. Don retired from Knoepfler Chevrolet.

Don received Jesus as his savior in the early 1970’s and was a member of Cornerstone World Outreach. He was honored to receive the Christ the Cornerstone medal. Don enjoyed baking, gardening, Nebraska football and telling stories.

Don was preceded in death by his parents, Earl and Joyce McGregor; his grandson Coen Jude McGregor; and his brother and sister-in-law, Clifford and Evelyn McGregor.

Don was known for telling stories. Those who knew him well had heard them many times over. But the greatest story was who he was, the life he lived, and the legacy he leaves behind.

Don demonstrated how to live a life of honor, service, integrity, generosity, humor, and above all, Godliness. As a husband, father and grandfather he was the first to volunteer, give and help. He did these things so quietly that many never knew how generous he truly was. Don loved God with all his heart, mind, soul and strength.