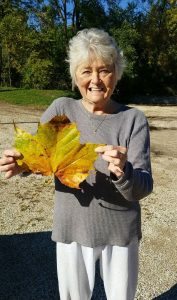 Daughter, Sister, Grandmother and Mom Judy Ellen Mallory, 72, of Cherokee passed away with her family by her side on April 28, 2021.

No funeral services are planned, but a reception will be conducted at a later date.

Judy was born on June 22, 1948 in Albert Lea, Minnesota to Ken and Beulah (Lee) Lillefloren.

Judy grew up surrounded by a large family in Albert Lea and moved to Cherokee the summer before her senior year when her father transferred there with Wilson Foods.

Judy married Mick Mallory on May 19, 1968. Although they later divorced, together they raised two sons, living in Cherokee virtually her entire life.

Judy spent many years working in the office at Farm Bureau Insurance and later co-owned Mallory Sales and Service and JCPenney Catalog Center in Cherokee. Judy retired from VT Industries in 2010.

Judy enjoyed providing for her family, arts and crafts, painting ceramics with her mom, her dog George, and spending time with friends.

Judy especially loved visiting her large extended family and made many trips to Albert Lea, Minnesota over the years for family holidays & reunions.