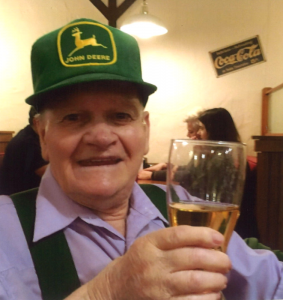 After graduating from high school he went to work for Sam and Sarah Mattingly of Toledo, Iowa. He farmed and milked dairy cows until his retirement when he moved to Correctionville, Iowa.

Bill attended the Assembly of God Church and later Grace Lutheran Church of Correctionville. He volunteered at the nursing home and was Bonnie Roark Ellis’s right hand man. He loved his John Deere tractors and probably had just about any John Deere memorabilia that you could imagine. He was admitted to Correctionville Specialty Care on December 23, 2003 and until his death. He was the longest residing resident at the facility.

He is survived by his farm family, the Mattingly’s: Sarah, Jay, Connie, Becky and Joe; and close friends, Paul and Sue Flemming and Dan and Bonnie Roark Ellis.

He was preceded in death by his parents; three sisters, Nancy, Lois and Geri; and one brother, Rob.