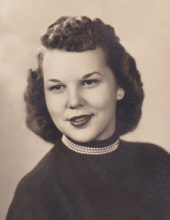 A Graveside Service will be held at 11:00 a.m., Saturday, June 5, 2021, at the Oto Cemetery of Oto, Iowa. Rev. Sarah Gengler will officiate. Due to the COVID-19 pandemic, masks are encouraged and social distancing rules apply.

The Armstrong-Van Houten Funeral Home of Anthon, Iowa, is in charge of the funeral arrangements. Condolences may be sent online to www.armstrongfuneral.com

She was born on the farm in rural Polk County, NE, to Walter and Ina Mae (Callaghan) Bernt. Janet graduated from Osceola High School in Nebraska. In 1956 Janet and Leonard Girardin were united in marriage and to this union two sons were born, Doug and Robert.

Janet later remarried to Hollis Lillie in 1972. Hollis brought with him three daughters to the family, Susan, Sandy, and Dawn.

Janet enjoyed cooking, baking, gardening, bird watching, and fishing with Hollis. In her younger years, she played pool. Every day, Janet and Hollis played rummy during their morning coffee when they lived on the farm in rural Osceola. Janet had a very good sense of humor and will be remembered for telling jokes. She helped Hollis manage and run multiple businesses around the Columbus area for 20+ years.

She was proceeded in death by her parents, Walter and Ina Mae Bernt; husband Hollis Lillie; a son, Doug Girardin; stepdaughters, Sandy Nickelsen and Susan Larson; and grandson, Todd Larson.